Congratulations to our very own Alanna Le Bris, who completed her first Marathon last weekend!

Although a self-confessed fitness fan, Alanna had never really done a lot of running until March last year. “To be honest, I only really started running last March when the Gyms were closed during the first lockdown. I needed to find something to replace my regular gym workouts”. 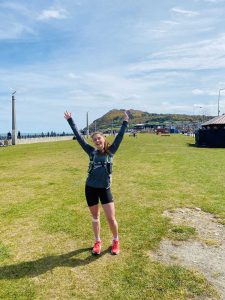 Applying herself to the task, by January, Alanna completed a Half Marathon and with the second lockdown meaning the gyms wouldn’t be opening for a number of months, she decided to set a new target of completing a full Marathon in May 2021. So that some good could come of it, Alanna set up a fundraising page to raise much needed funds for a cause close to her heart – the homeless and housing services charity, The Peter McVerry Trust.

As Alanna explains,  “I had done some fundraising for The Peter McVerry Trust throughout college and just really admire all the work they do, especially throughout the last year. It’s been a lot harder for them to raise money this year so thought I would do what I could to help out.”

Taking advantage of InvoiceFair’s ‘Staff Charity Day’ initiative, where staff get one day’s paid leave every year to do something that benefits a charity, Alanna set out at just after 10am on Friday 7th May, on her own journey with destiny. Starting out in Bray, she ran northwards towards Killiney before turning around for the journey back, finishing on the Seafront in Bray. Including breaks, Alanna completed her first Marathon in an impressive 4 hours and 10 mins. 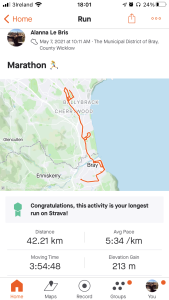 Initially Alanna set herself a very modest target of raising €500. By the time she completed the Marathon, her fundraising page had reached €1,660, thanks to the generous support of family, friends and her colleagues in InvoiceFair!

And, it didn’t end there! The management of InvoiceFair were so impressed with how Alanna had applied herself to such a major undertaking for a relative newcomer to running, they pledged to match this total, meaning that Alanna’s run has resulted in a total of €3,320 raised!

“I can’t thank everyone who donated enough and having had first-hand experience of the work that The Peter McVerry Trust do, know how much good this will do!”.

So, the big question, would she do it again? “It might well have been my first Marathon, but I’m pretty sure it won’t be my last!”.

We're delighted to announce that the Government has added InvoiceFair to the COVID-19 Credit Guarantee Scheme.   InvoiceFair, the... continue reading
ALTERNATIVE FINANCEARTICLESBUSINESS GROWTH

Is your business a sitting duck?

A few days ago, following the news that Ulster Bank were embarking on an orderly exit and that Bank of Ireland were making wholesale branch closures,... continue reading

Fill the form below and we will contact you as soon as possible to discuss the best solution for you and your company.